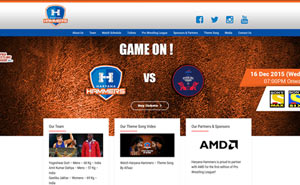 What could have been a better way to end 2015 than snapping up some of the most talented wrestlers, including Padma Shree Awardee and Olympic Medalist Yogeshwar Dutt, and becoming a part of Pro Wrestling League, the richest wrestling event ever?

Olive Sports/Olive Global was among the bidders at the auction that was held in New Delhi. Having done extensive homework, we knew our way and succeeded in acquiring the franchisee for Team Haryana for the first edition of Pro Wrestling League (PWL).

What makes Team Haryana really special is the inclusion of Yogeshwar Dutt - The 2012 Olympics Bronze medalist. He also turned up as the highest gainer in the auction and was bought for Rs. 39.70 lakh by Mr. Dipin Kapur, Director, Olive Global. He's also been clubbed in the 'club' category that consists of only 6 wrestlers in total.

ProSportify is conducting this Kushti tournament in India, in association with the Wrestling Federation of India. Six city-based teams, with each team having nine wrestlers, will be part of the first edition of PWL that will be held from December 10-27, 2015. The tournament will be played across six venues in India, and will have a total of 18 ties - 15 among them in the league phase, two semi-finals and the final. Each tie will have nine bouts and will be played in line with the Olympics rules.