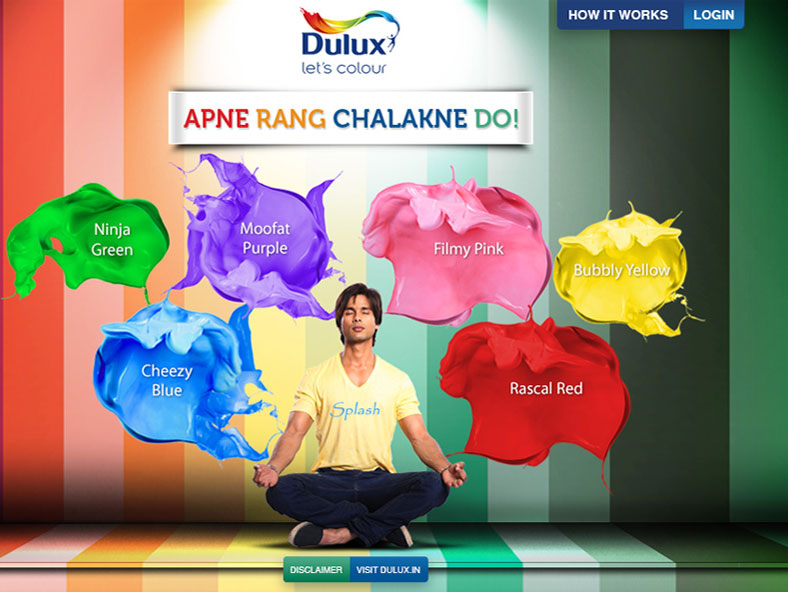 When was the last time you expressed yourself with colours?
If you can't remember, then now is the chance for you to paint the world in your true colours with 'Splash', a Facebook app by Dulux, from the house of AkzoNobel - the world's largest Paints and Coatings company.

As part of the digital extension of Akzo Nobel India's 'Dulux: Apne Rang Chhalakne Do' campaign, a special microsite and Facebook application called 'Splash' has been designed for Dulux, by Olive e-business Pvt. Ltd.

Splash was launched on Facebook as a special Holi initiative; and created great buzz around its launch, generating more than 30,000 'likes' in less than a week. The popularity of the funky and colourful app can be seen with over 7000 people having already experienced the application in one month and the number is growing. Boman Irani and Shahid Kapoor, added a glam quotient to this splash party by splashing special messages for their Facebook fans.

"Dulux is a brand that reflects the many human moods and expressions through the medium of colours. The idea was to create something that reflected the core campaign idea of 'Apne Rang Chhalakne Do' and celebrate the 'colourful conversations' consumers have on social media. Hence, a unique and innovative social media focused app was created to help consumers splash their true colours." Pushkar Jain, Marketing Manager, Dulux, Akzo Nobel India.

Another important USP of Splash is that unlike other FB apps, Splash is a rather simple, user-friendly and uncomplicated application with easy 'click and send' steps.

"With the digital revolution, we wanted to move beyond colour on the walls of our homes and bring forth our brand's appeal to Facebook users. A simple yet unique and fun app, Splash has witty messages that have appealed to users of all age groups. We have received tremendous response from the users so far and are optimistic about further popularity of this app. Dipin Kapur, Director, Olive e-Business Pvt. Ltd.